The year 2021 marked the start of the cooperation between the Enjoy Jazz Festival and an artist with the aim of designing an art poster as a figurehead for the festival.

For the opening, with the support of Claes Nordenhake and Galerie Nordenhake, the Nigerian-Norwegian artist Frida Orupabo could be won, who in her works deals with the crimes of colonialism and their effects up to the present day, as well as with racism and gender stereotypes. Orupabo's works have been shown in numerous exhibitions in museums, as well as at the art biennials in Venice and Saō Paulo.

In the course of this cooperation, the festival would like to invite artists who are inspired by jazz and improvised music to create their art or who reflect on their sound biography to design the artistic festival poster or to provide an existing motif for the design.

An accompanying exhibition is also planned, in which a selection of the artist's works would be shown. 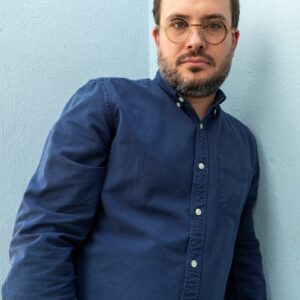 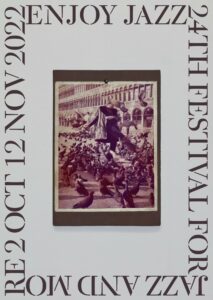 "Film music for a still image," is how the photo artist Iñaki Bonillas, born in Mexico City in 1981, calls the motif he worked on for the poster of this year's Enjoy Jazz Festival. It shows a man in the midst of soaring pigeons in St. Mark's Square in Venice, probably taken in the 1970s, capturing this brief moment that becomes a narrative, an imaginary film. The colors are faded, the image indistinct. It shows the artist's father and, after his early death, accompanied him through his childhood, as a portrait of a happy, playful moment and linked to the music that the father loved, whose record collection has accompanied Iñaki Bonillas ever since and which forms the soundtrack of this film score: Jazz. Bonillas is not a photographer in the usual sense. He, who calls himself an "attic photographer," works with photographic found objects that he places in a new context and links to the present.

Thus, memory becomes a possible explanation and redefinition of the present. His works have been shown at the Venice Biennale and the Museum of Modern Art in New York, among others. To a large extent, his image archive is closely linked to his family history. For "Soundtrack for a Still," he asked friends who share his passion for music which jazz piece they would choose for this painting. As a result, the work was shown side by side five times, each time with headphones playing different music to accompany it, which, in the result of the acoustic shift in meaning, acted as if they were five different photographs. It was thanks to his father, he says, that he began to be drawn to jazz himself. Through his extensive music collection, he said, he began collecting records himself. He says that the work "Soundtrack For A Still" is about understanding who his father was and that he himself was able to approach jazz because this music was so important to him. As a connection of the past to the present, as the soundtrack of a still. 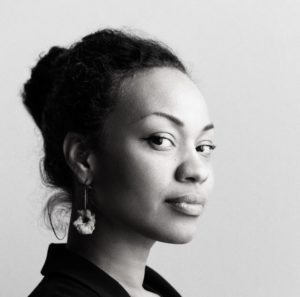 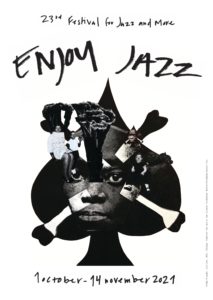 The 2021 festival motif comes from artist Frida Orupabo, one of the most exciting protagonists on the contemporary art scene. Born in 1986 in Sarpsborg, Norway, Orupabo now lives and works in Oslo. Her artistic practice consists of collecting media and personal images, which she digitally archives on her Instagram feed @nemiepeba
and transforms into analog collages.
In her art, Frida Orupabo addresses racism in a provocative and extraordinary way. The basic material for her digital collages: disturbing assemblages of image fragments from colonial archives and excerpts of U.S. films, in which she poses questions about race, family, gender, sexuality, violence, and identity by decontextualizing, defragmenting, and overlaying the images.

Her motif for the festival emerged from a superimposition of collage motifs from her Portikus exhibition in Frankfurt. Associations with experiences of oppression and violence, the colonial past and its connection with the still resulting pejorative perception of non-white skin color and non-Western cultures become visible as a network of fine ramifications. Orupabo herself experienced the intersectionality - also thematized at this year's festival - of multiple discrimination as a person of color due to her Nigerian roots, and as a woman.

Enjoy Jazz, the festival for jazz and others, presents itself for the 25th time in 2023. For six and a half weeks, the festival offers top-class, extremely diverse events with a focus on jazz, but also related genres such as classical music, pop, rock, hip-hop or electro.

All events at a glance

Our venues at a glance

To the venues
Buy tickets